Hello peeps, just a quick update on my workdesk this Wednesday, still in the dark (the evenings are SLOWLY getting lighter) and I am starting to make my February 365 Challenge Journal page in readiness for the start of the month. If you fancy joining us and baring your desk then full details can be found over on the Queen of Desks, Julia blog here

Just a quick update, I have managed to make a few Christmas cards.

I like to have about 20 made by the end of January so that when I panic in November it gives me a 'phew' moment! 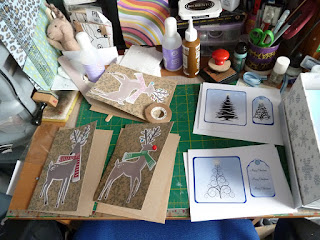 Most of them are upcycled cards we received this Christmas, which means they are reused as you cannot recycle cards with any glitter on them so at least they get a 2nd use! 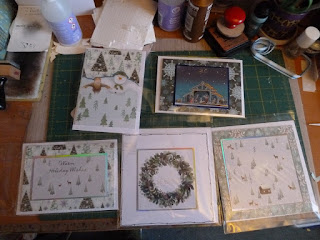 So, not the amount I would like to have made but a good starter for ten at least!
Onwards and upwards

Hello peeps, hope the week has been good for you?  I finally have gotten a chance to make some Christmas cards!  After seeing all the other deskers make theirs I was determined to get a few under my belt.  Each year I like to try and make 20 cards before the end of January so they can be put away and come November when panic sets in at least I have enough for family! 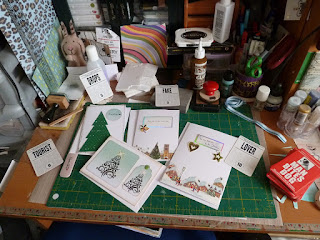 My "Man Bites Dog" cards this week are 'Tourist Drops Fake Lover'! No idea if the TV show Love Island is still on (never watched it) but maybe it is a reference to that!!?

So, if you fancy baring your desk too, be it bare, busy, clean or creative then feel free to pop over to the Queen of Desks, the lovely Julia's blog here for the linkup.

Hello, thought I would update on my allotment as not done any crafting the past couple of weeks as my hands are not their best at the moment with the rheumatoid arthritis and this wretched damp weather we seem to have been having the past few months in the UK!

My plot is still drenched and soggy so I have limited standing on the soil and working mainly from the sides and paths I have created.

I have been trying to over winter some corn salad to see if I can get an early salad harvest under a cloche, so far it seems to be hanging on in there-they are SO small, but then I suppose there is so few hours of daylight at the moment.  I hope in the coming weeks as the days lengthen they will suddenly get a growth spurt! 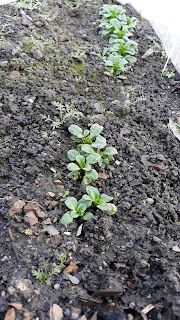 My kale is hanging on in there, the red kale has done a LOT better than the green kale 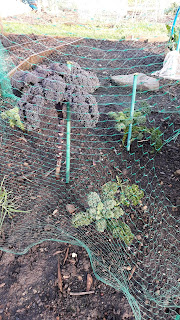 My over wintering onions I planted in a mound all along the length to see if that would help as that end of my plot is really sodden and until recently was still a bit under water seem to have worked, I have covered some with the metal mesh I used to keep my squashes off the soil back in the autumn in an effort to stop the birds trying to pull the stalks out of the soil!  The rest are planted up in a small plastic greenhouse (those small 4 foot high ones) in my garden until I am able to work the soil on the plot when it dries out a bit more. 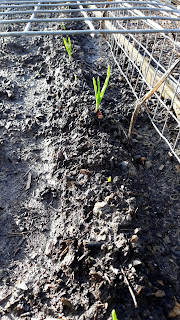 My plot-kale, spinach and purple brussel sprouts still ready for picking (the leeks at the very top of the plot are covered in rust and didn't really bulk out so don't think I will bother again. 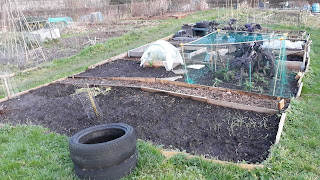 I am trying something new in my compost bin this year.  In a book about compost I borrowed from the library it said to create a chimney of wire in the middle as a way of getting some air into the middle (my compost in the first bin is quite wet, presuming I need more brown matter) so in my 2nd bin I am going to see how it works.  I have only just started the bin, putting down some wire mesh on the floor in a bid to keep the rats out and I was lucky enough to convince the works canteen to give me a large bin bag full of spent coffee grounds.  So according to Charles Dowding these are classed as brown (rather than green) matter and are better in a compost bin rather than spread on the soil (where they can go mouldy) so I thought I would give that a go too-it doesnt cost anything so I reckon it has got be worth a try, if it doesn't work for me then I will start again. 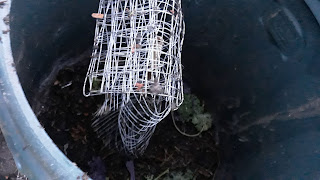 My garlic in my small 4foot high greenhouse thingy at home is starting to sprout nicely.  As soon as we get a cold spell I will put them outside as they need sub zero to help split the bulbs (or at least that is what I read in another one of the many books I am borrowing from my library!) 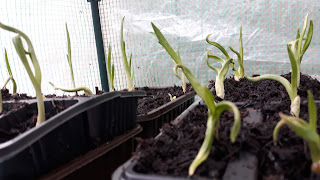 During the wet dark evenings I am sat here with the dread that is TRYING to sort out a plan for crop rotation.  I have read so much up on it and it seems like the main thing is rotate brassicas, onions and potatoes but who knows as I then read others who don't and find it fine!  I have decided to put my onions etc this year where my spuds and courgettes were last year and the spuds will go where my onions and roots were last year-as to the rest-who knows!! 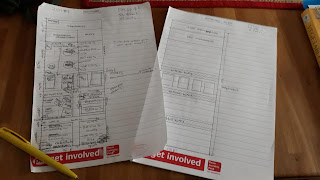 then finally I have started sorting out my seeds.  I have placed like with like in envelopes (i.e. all carrots together, all beetroots together) but I haven't thought about sowing times etc as I am hoping I can do some seed swaps in the next few weeks which may thin things out a bit. 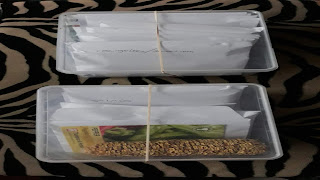 So there you are, fingers crossed the soil will dry out a bit.  I have some potatoes chitting from local potato days I have attended and have started cleaning my tools and sharpening them all ready for the new growing season.

Happy "What's on Your Workdesk Wednesday" when we join the lovely Julia here baring what is on our desks be them clean, messy, creative or in this case my dining room table as I need to spread out for this task!

So, a couple weeks ago my ankles did their spectacular "oh we have had enough" and collapsed under me, gotta love Rheumatoid Arthritis!  I am fine, bruised to buggary but fine.  unlike my coffee table that I smashed into and broke-fixed that so all good.  BUT what really crushed me was smashing this bowl.

This is a bowl I made in the year 2000 at a pottery course I did for 3 years in our local college using bristol blue glass ground down to create a series of piece (I also made a clock that I still use every day) and it smashed into several pieces!

I decided to have a go at fixing it myself.  I thought I would take the japanese stance of embracing the flaws where they repair with gold to create a new piece but I didnt have gold so I used araldite glue! 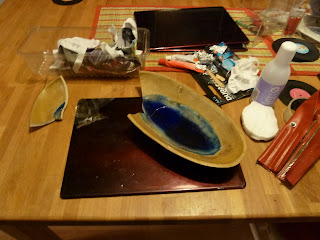 It is not perfect, BUT, it is on once piece (for the time being, only time will tell) and back on the coffee table in pride of place! 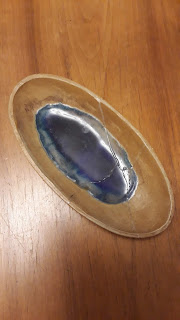 So what is on your desk this week? Why not join us using the link above and dare to bare! 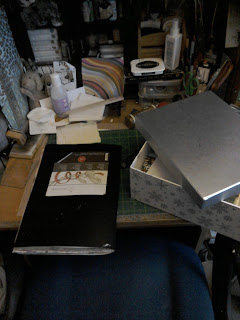 Happy new year folks, I managed to update my blog with my last couple of updates for my gratitude jar and pressie makes before my laptop died!! Grrr....so trying to upload this via a different route, hopefully it will work.

Anyway on my desk this week is my 365 journal and the box I put my homemade Christmas cards in, none yet (been loving looking at Shazsilverwolf blog for inspiration though) but it is filled with any images I think I can reuse from this year's cards to be upcycled.  The rest of the desk is a mess and needs sorting, I will do that, honest.....
Happy crafting
Kyla
Posted by Kyla at 08:48 11 comments:

So for Christmas this year many of the family got handmade hampers with chutneys, jams, pickled nasturtium seeds (bit like capers), elderflower cordial and Sloe Gin.

However those overseas means I cannot always send handmade food items (especially to New Zealand) so I have to rethink their gifts.

This year I was able to make my mum some glass ear rings and necklace.  I attended a glass workshop and we made different items learning how to layer glass rods etc, I really enjoyed it and it is something I would do again (it could be quite addictive I have already done a couple of glass blowing lessons too!) 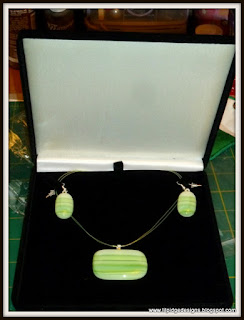 It meant got to make something individual and personal that I know she won't already have so I was pleased with that.

If anyone else has any ideas for presents that can be sent overseas then please let me know as I am running out of ideas!!

Happy New Year for 2020
For the past few years I have made a gratitude jar, basically the same old coffee tin covered in gaffa tape with a pen and some old cut up scrapbook papers inserted.  Hubby and I try a couple times a week to fill in one of these small scraps of paper with something nice that happened, it may be meeting up with friends, a joke we heard or a gig-either way just something we are grateful for.

We then add it to the tin and in the new year we sit down and go through all of them and read them out loud-a year of small things to be grateful for in the past year.

It costs me nothing to do and only takes a minute a week but New Years Day brings such a warm glow remembering some of the lovely things that we did, heard or saw during the past 365 days and it gives hope for the next 365 days. 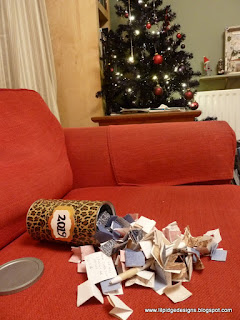 I hope you all have something, no matter how small to be grateful for and helps you raise a smile too, here is to 2020 and whatever it may bring.

Hello Happy New Year and I hope you had a fabulous Christmas be it working, resting, volunteering or rushing between family and friends

I am going to try and blog more this year so hope to blog a bit more about my allotment as well as my crafting and maybe even a bit more about some of the #dailywalks I have done over the past 4 years
.
Either way, this is what is on my workdesk this Wednesday: 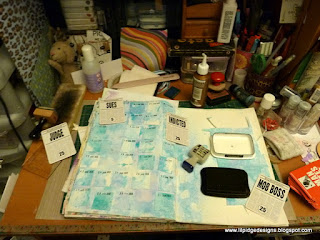 Yep, my January 365 Journal challenge is almost finished ready for the first entry!  Go me!!

I tend to keep the 365 challenge pages quite simple and try and write in them every day.  Just need to update my January pages of my bullet journal and sort out the gratitude jar for 2020

So, What's on Your Workdesk Wednesday? Why not join in with the Queen of Desks the lovely Julia, full details are here