Hello peeps, I have been away for a couple weeks.  My previous post will explain why and where I have been (it was FABULOUS!!).

So on my still tidy desk (I know, I have crafted honest...I have just been making sure I put stuff away after...a bit of a novel concept for me !!) is a plaster candle holder of a  green man I have had for YEARS hanging on the wall-so I decided to finally paint him up. 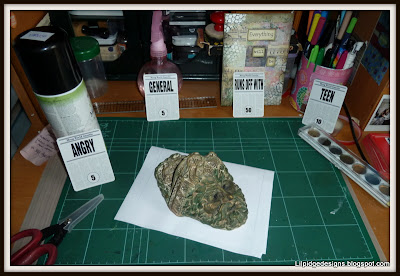 My "Man Bites Dog" cards this weeks are 'Angry General Runs Off With Teen!!!'...well, not much I can say to that, but I bet certain newspapers over here would love a story like that!!

So, if you'd like a legal snoop at desks all over the globe, then please pop over to the lovely Julia's blog  here

A wedding and a Volcano!

Hello peeps.  I have been absent for a couple of weeks as I have been busy with my brothers wedding.

My brother, Andrew, met his wife (oh that sounds so odd!!) Zoe in Ecuador where they lived for 3 years.  They met on the other side of the planet up a volcano where they were both working for a charity-the odd thing is they were both living in London before they met, yet there is no reason why they would have met in London, different friends and past times, so it was definitely fate that they both met.

They married Friday 13th in Haselmere a mix of traditional church wedding with more than a mix of Ecuadorian flavours (and a lot of it in the native tongue of Spanish).

The wedding was beautiful, the bride was stunning (in what I think was the most beautiful dress I have ever seen) and my brother looked so happy. 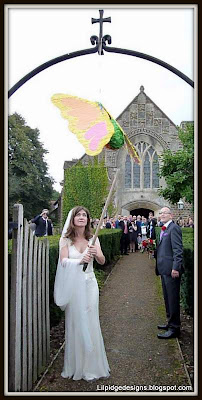 As they left the church they had a homemade piñata filled with rose petals (instead of confetti) which the bride and groom walloped with a rather large stick! 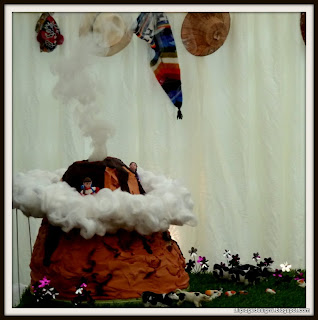 Since they lived on a volcano the wedding had this theme. The tables were named after the various volcanoes they lived on, worked on and hiked up.  Their wedding cake even had cotton wool clouds and guinea pigs....though to top it all the wedding cake also erupted with a plume of smoke from the top!!! 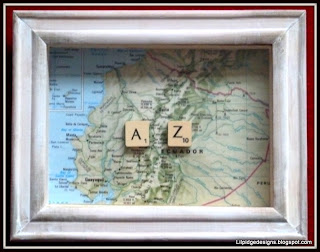 I decide to make a frame for the happy couple with a map of Ecuador and scrabble tiles with their initials (as I thought A-Z sounded like a travel book!) 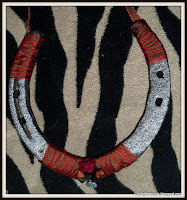 I also wrapped a horseshoe that I found when clearing out my dad's shed in ribbon.  It took a lot of cleaning and 4 types of glue before I found one that worked (its the first time Multi Medium hasn't worked!).  Its only 5 months since dad died and I thought it would be nice to have something of his there.

It was a lovely day and I met Zoe's wonderful blended family (Father, step Mother, Mother and Step Father and each of their respective families) and friends.  It rained a bit but no one seemed to mind as it was such a fabulous day.