An overdue catchup and a bit of a rant

Good grief where has the time gone? I have been slack in updating the blog, I have no idea where the past week or so have gone! Is this the first sign of getting old (the grey hair and sagging boobs don’ count!)? Does that mean I need to start crocheting myself a hat (ooh, now that is another craft I can have a go at! As they say, every cloud has a silver lining!!) and get a couple dozen cats-nah! I am struggling too much with knitting to take up another hobby and I just don’t ‘get’ cats!

Which brings me to the next point (was there ever a first?), after the snow of Monday had cleared (I really cannot remember a time in the past 20 years when we have had so much snow, or when it has stayed around for so long-I even had the chance to go to the local churchyard, which looked so pretty in a foot of snow, instead of making a snow angel I made a snow bat!) Wednesday saw me another year older, but sadly, no wiser (wider yes, just not wiser). 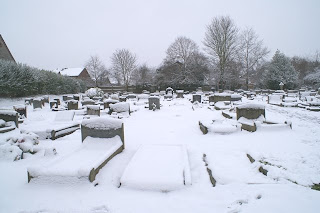 Just look at our local graveyard-so much snow!

I have a rule that I won’t work on my Birthday (or lift my finger if I can get away with it!) and the day started off to a great start with my pressies! My lovely OH got me a couple of CD’s (including Sisters of Mercy for those long ago, but not forgot

ten (its only the recent past I have trouble remembering!) heady goth days (ah, rum and black and the taste of Diamond White cider and snake bites), a knitted scary rabbit keyring and a few other bits and bobs (and the promise of a shopping spree for crafting stuff in the near future!), my brother got me some gloves and a fantastic book on origami with illustrations by Rolf Harris, and a brooch we saw on our New Year trip to Whitstable of a hand with chains

and a tin heart (its as odd as it sounds but really nice). I also got some fab jewellery making kit from my sister-in-law and some great gifts from the girls at our weekly craft get together, not to mention some from the CB forum! So a big thankyou to everyone. 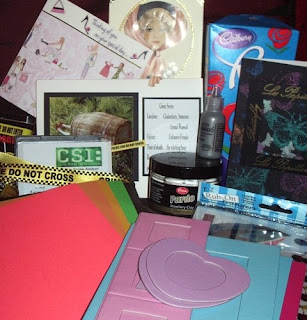 These are just a few ofmy crafty gifts

We had a lovely day out, Lebanese for lunch, and a trip to Café Maitreya (previous winner of Observer Food magazine best vegetarian restaurant) in the evening, all brought crashing round my ears the next day after a trip to the dentist! The tooth I have been having untold hassles with for the past 4 months (root abscess, root fillings etc) now needs pulling out! Another one! What the ****. The past couple of years have seen me having to pay for SO much dental work. Arrggggg…I was obviously not meant to have a holiday this year either (last years savings funded my first fixed bridge)-life sometimes sucks, I know it could be so much worse, but it does take some effort to pick yourself up after each knock back.

Or maybe not……..twats in small hatchbacks with oversized exhausts, people who let their dog foul and then don’t clear it up, over packaged food products (I actually saw a single pepper shrink wrapped with a plastic label attached in Morrisons!!)…….oh dear, it’s true, 38 years old and now a grumpy old woman! Hurrah, I now have a license to moan (not that I ever needed one before!).

Anyway, back to the reason for life…crafting!

With so much to get clear in my head I decided to take a days annual leave and craft (that always clears my head and gets things in perspective). 6 hours later I have made a dress! I had no pattern and it was a basic pull over the head design, but still a dress. Mind you, even with a belt it looked like a sack,, a sassy red and black silky sack, but a sack none the less (so, that’ll be made into a cushion cover then-I think I am going to end up with a few of those) then….

…Dah, Dah, DAh (spooky music in background). the dreaded sewing machine killer (yep, that’ll be me) struck again.How many times has this killer struck? Nothing had been heard about her for many years, so the machines thought it was safe to venture back out, but no! In a sudden and unprovoked attack the count mayjust have reached No 3!

There I was, innocently make my masterpiece (I didn’t know about the ‘sack’ until I tried it on later) when the machine seized, made a growling noise (nearly banged on next doors wall thinking it was their dog) then chugged a bit, before, ! A piece of metal fell out from inside!! I have NO idea what it is or what it does, but a quick bang on the table top got it working again-only time will tell if its terminal or whether the killer will strike again…

Anyway, I also received this months ATC from the CB Forum, this months were from CraftyCharl100487 and Clara Cluck-thankyou they are both lovely (gotta love a bit of fantasy). 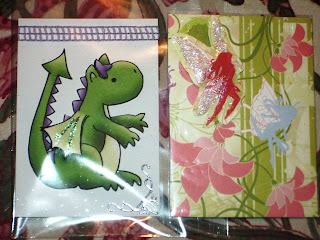 I also made pressies for my brothers bithday and my family in New Zealand. The cuff links are for my brother and are made from vintage leather buttons, the ear rings for my cousin are of course plectrums, the brooch is for my aunt (same as the one posted previously) and the keepsake book was for my mum and dad, I hope they like them. 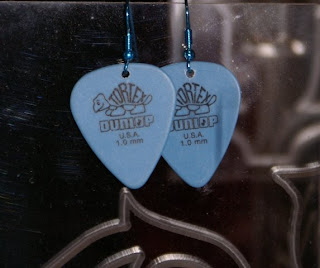 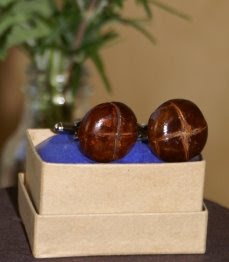 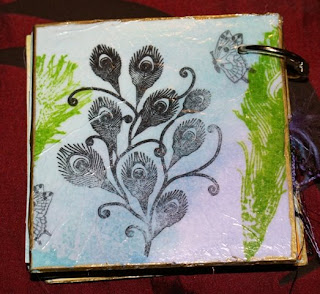 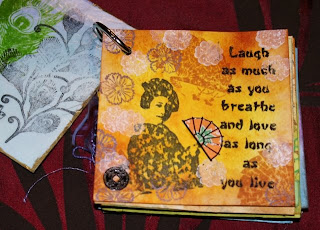 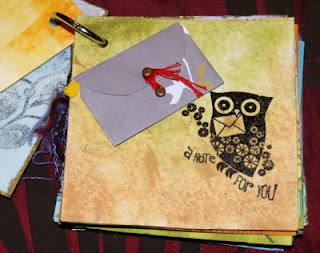 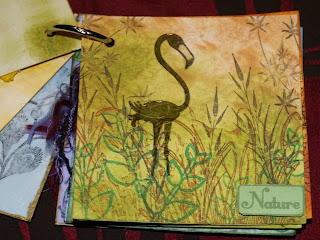 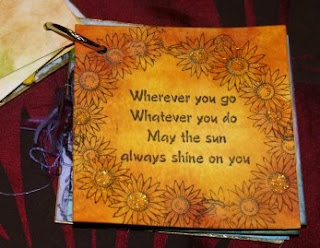 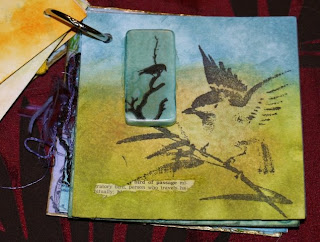 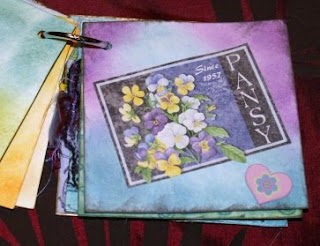 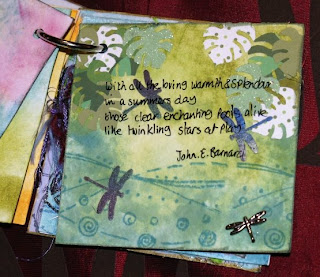 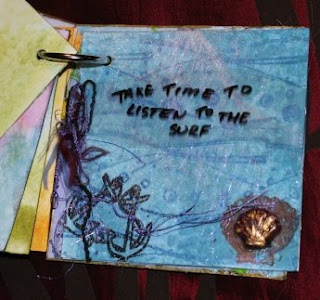 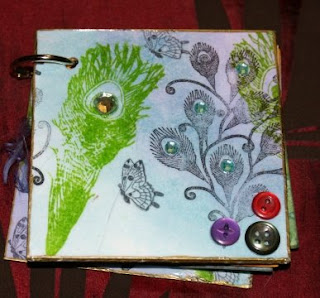 Well, I did say it was an overdue catch up!

I have also been making a few cards again: 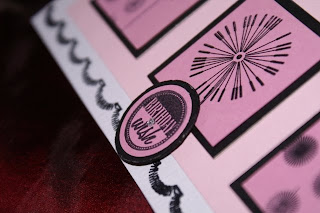 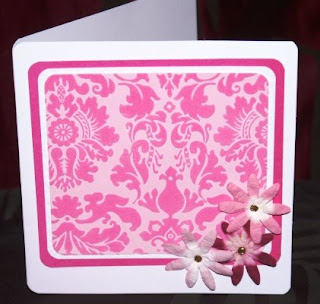 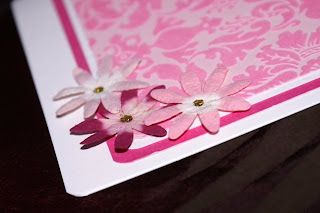 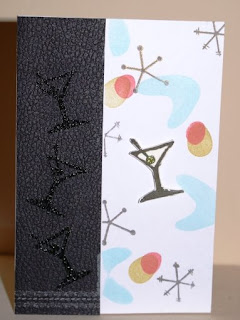 Sick to the back teeth, but not of crafting

Sometimes, you have to admit that life sucks. You get good weeks, and you get bad. The past week was a bad-un. My hands, knees and feet have been hurting like hell and to top it all the temporary filling my dentist put in when my root infection cleared up is still in as the dentist cancelled and it is now all swollen again and so painful I cannot touch it-so lets just say when you are feeling pretty damned grotty, its hard to pick yourself up and get on with things, yes I know you have to, work demands, home etc etc, yadda yadda. But, even then, it still boils down to the fact that sometimes life sucks! But as we all know, the wonderful world of craft allows us to express ourselves and to a degree lose ourselves, even if only for 15 mins to make a card.

I also got my prize for the New Year Card Challenge on the CB Forum, from the lovely Jane, in the post this week, a lovely array of paper crafting products which I am going to love playing around with. I made another of one of my favourites this week-shaker cards! A couple of friends have just had their first child, so this was the perfect excuse I need to get out the acetate and the micro beads. 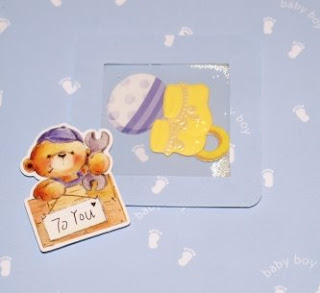 I am such a sucker for a shaker card, a bit of noise and movement in what can be a boring everyday object is always a bonus (just think of John Travolta in a 1970s white suit!!)

So, in an effort to try and forget my woes (lets not even go into the gas bill that came this weekend-I know its been cold, but I didnt realise that I signed up with Dick Turpin utilities!) I threw myself into making valentine cards, using glitter glue, acetate and some light airdrying clay to make heart shaped lock and keys. 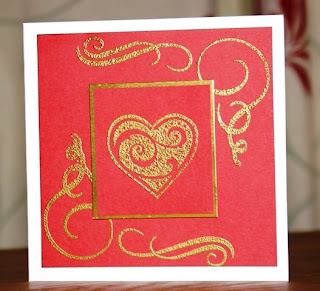 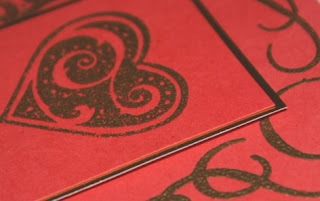 Gotta love a bit of embossing 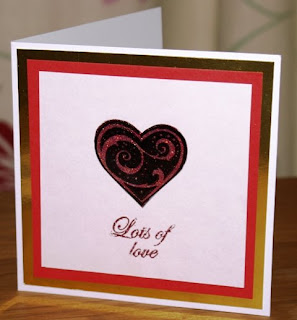 oh, and there's the acetate and glitter glue.... 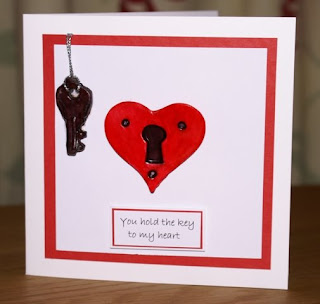 and the airdrying clay (I am loving this card...big hint to my OH!!)

Then I decided that I need a bit of bling in my life to cheer me up so I made myself a large statement piece, of a lovely green wooden and pearl ring

I dread to think what I must look like, so far I have made a skirt, bag, jewelry and a scarf-well, at least I know that no-one else will be wearing the same!

And to top it all I have made some fabric brooches, a few of which I have managed to sell, so that is even more money to charity (but now I need to make some more to replace them!). 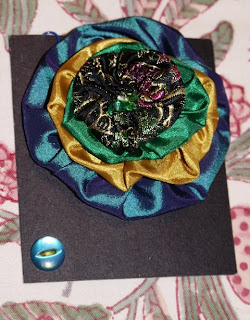 Well, I did say I needed cheering up!
Then to top it all, I decided that I would try something new. I made a handbag. I made the whole thing in 2 hours, including cutting, interfacing and stitching and even adding a magnetic closure. I lined it and added a gussetted bottom (ooer) so that I could cram even more goodies into it when out shopping! This time I am really pleased, as I am a bit of a handbag fetish, and they arent very cheap-so this is a great alternative! 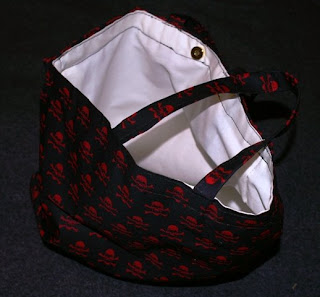 I am loving this material-so far I have made an apron, skirt and bag from it! I am SO proud of this, especially since I bothered lining it also (as I tend to cut corners when its something for myself). My OH said that when I went into the office in the morning I was SO down, in pain and generally ready to give up, and when he came home he didnt know what to expect. What he wasnt expecting was a flurry of activity, with scissors, ironing of interfacing, sewing machine etc all happening at speed and a happy me!! I would say that crafting is cheaper than therapy, but as any of you know, for every bit of re-purposed wall paper and old junk we use, there are expensive stamps, glitters, flocks and a whole host of lovelyness in the craft shops (as well as craft fairs)!
As I said, its been a busy week. Yes, it has taken me longer than usual to make some things, but the main thing is that I have spend time doing something I enjoy, and what is life if you cant have a pice of happiness now and again (and to spread this around, I also sent out a few random acts of kindness to some of the ladies on the CB fourm, well karma is always good to stay in the right side of!!).

Anyway, off to play in the craft room.
Happy crafting